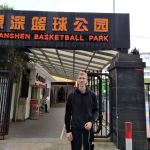 Stephen has studied Mandarin for many years, so after graduating from business school he decided to move to Shanghai to join a market intelligence firm as a data analyst, mainly advising institutional asset managers on doing business in mainland China. Later he joined WeWork – at the time growing quickly in China – and eventually relocated to New York to join the company’s data analytics team supporting the finance department.

He enjoys working with students on all topics related to law, economics, and finance; and the LSAT and GMAT both still hold a special place in his tutoring heart. He’s a fan of basketball, e-Sports, and Chinese literature.